We were simply giddy when Mike and Alison began to tell us about their Seattle wedding.  They found us through Offbeat Bride (Firstlight Photography advertises there) which is always a signal that we’re going to be in for a fantastic wedding. 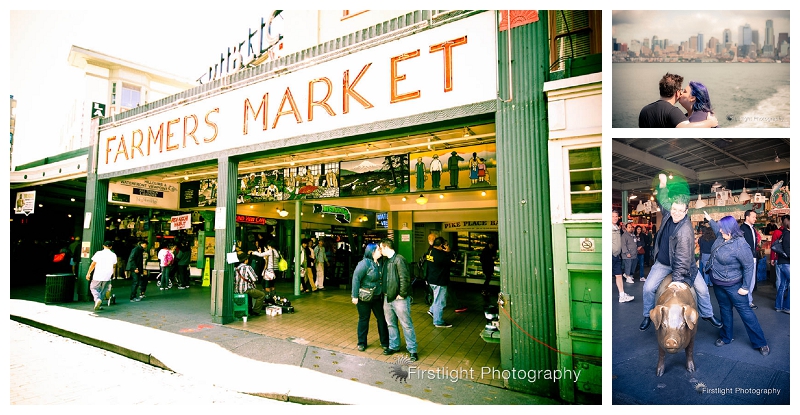 For starters, Mike and Alison met at PAX (both are event volunteers), the Penny Arcade Expo, Seattle’s big convention for the video-game crowd.  This tidbit helps set the tone.  They proceed to tell us they were considering a time travel theme for their wedding.  So we were thinking steam punk.  But we were thinking wrong.  We weren’t really sure what they meant until we saw their invitation.  The event was to be a Time Traveler’s Ball.

Wear what makes you feel awesome, but please do arrive fully dressed. Our reception is Time Travel-themed, and there will be prizes for best costume and best backstory.  Dress as a historical figure, a futuristic hero, or come in present-day finery.  You’ve got loads of options!

They had us at that first line.  We really hadn’t a clue what to expect from the wedding – and that is the exciting part of being a wedding photographer.  Alison also shared with us that she was making origami flowers – including her bouquet. 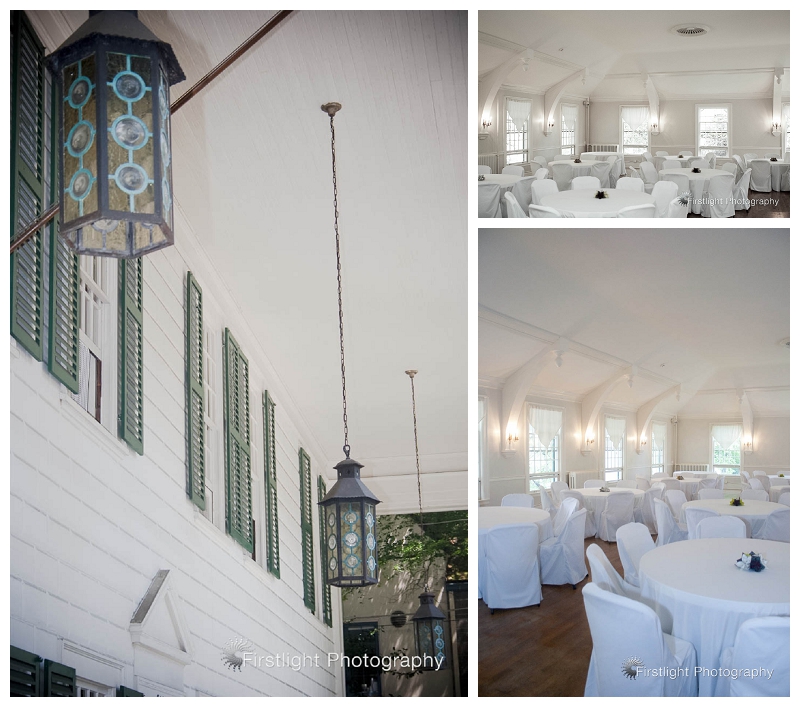 On the big day we arrived at the Daughters of the American Revolution chapter house located in Seattle (Capitol Hill to be exact).  The venue is a replica of George Washington’s home in Mt. Vernon, Virginia – the perfect back drop for a time travel wedding.  We typically arrive early to deal with any parking issues or traffic.  This afforded us the opportunity to get the lay of the land.  Mitzi was also able to help Alison with her finishing touches.  We both take our “other duties as assigned” very seriously! 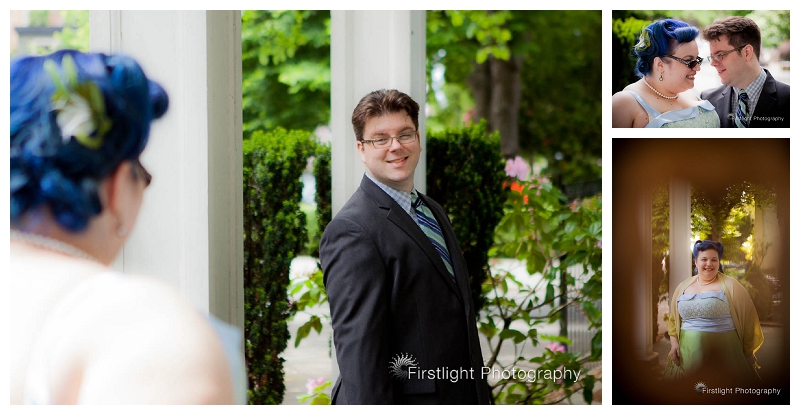 Alison and Mike wanted to do a first look photo (which we love) and we did some couple photos right before the wedding.  These days you can find just about anything on Etsy.  Alison was able to design her amazing 50’s inspired dress with Charlotte of Pixie Pocket, an up-and-coming designer from New Zealand.  Two hours of pins and hair spray and voila, magic wedding day hair courtesy of Tava LaBorn of Salon Ciba.  Mike looked dapper as all get out in his suit. 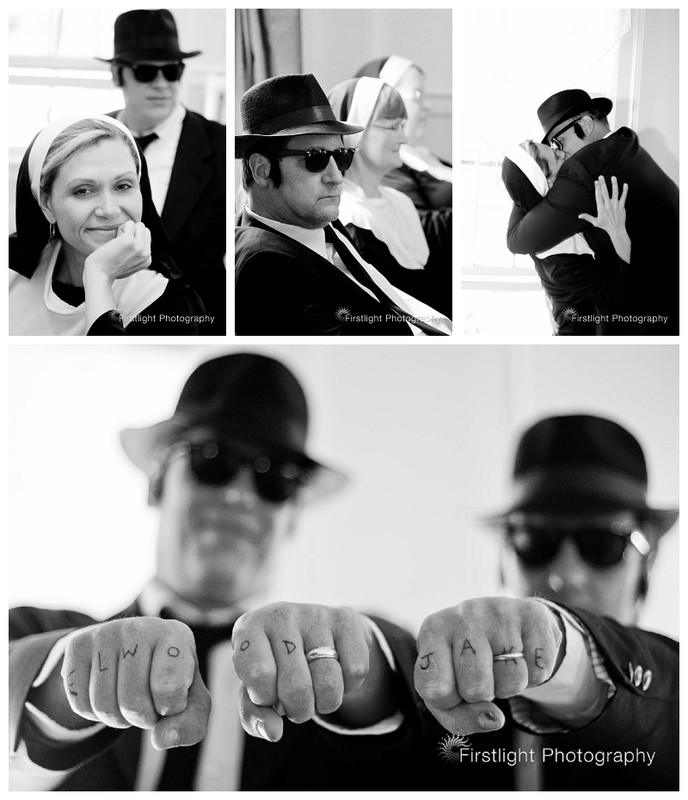 While we were wrapping up the couple photos we noticed some guests starting to arrive.  First we saw a gaggle of nuns followed by Jake and Elwood.  Yes, it took us a minute to put 2 and 2 together.  The great part about the theme was that many different segments of history were represented.  The best man wore a traditional Japanese hakama, Mike’s parents wore their Star Trek communicator pins (although his sister did not show up in a Wookie costume despite assurances to the contrary), another guest wore a fantastic French Renaissance styled gown (she also rocked a magenta pompadour) and we can’t forget a steampunk time traveler – riffing a bit off the couple’s and her shared love of all things Doctor Who. 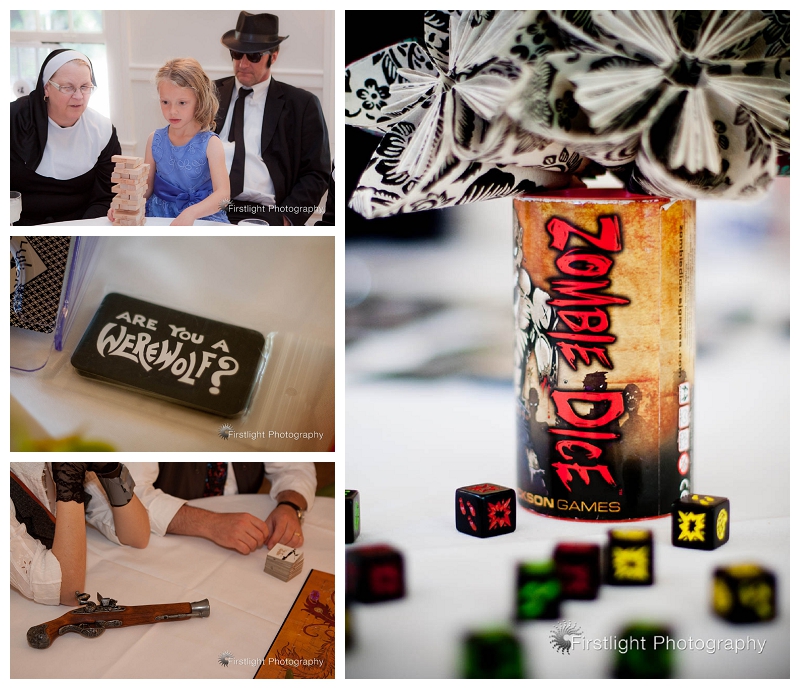 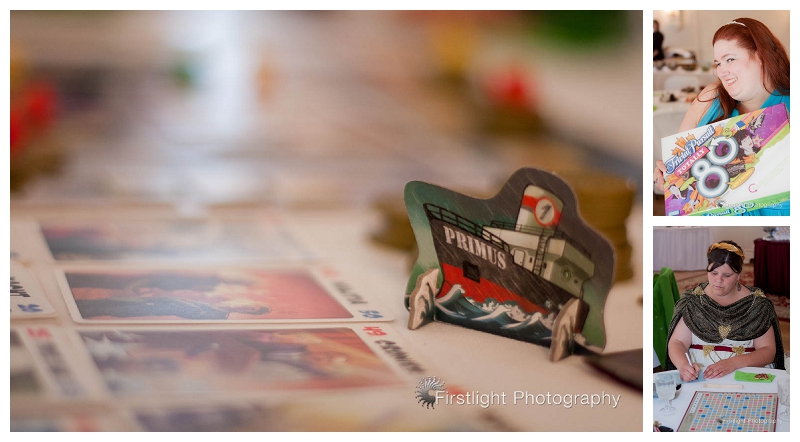 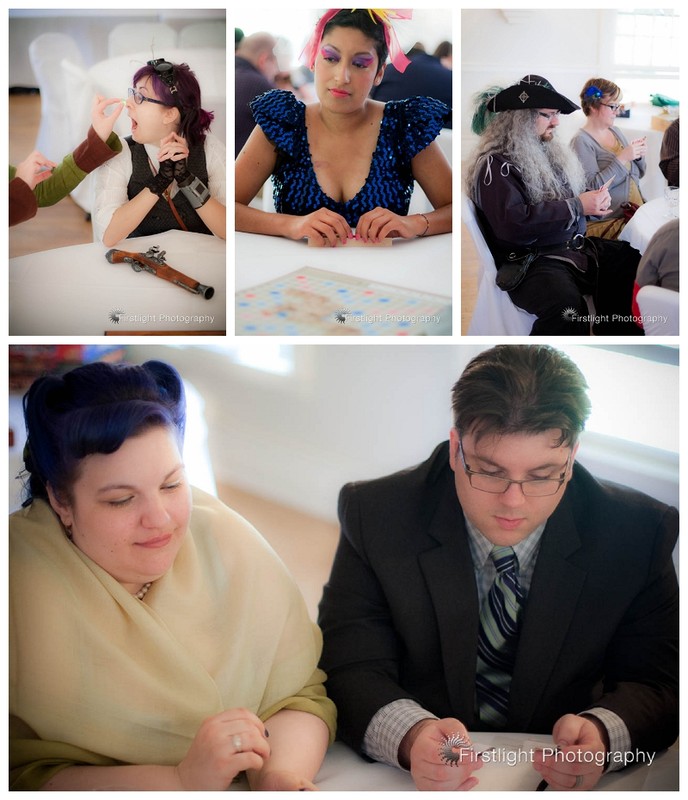 The first thing that you notice about Mike and Alison is that they are totally ga ga for one another.  The second thing you notice is that they have surrounded themselves with the most amazing family and friends.  The ceremony went off without a hitch.  A good friend officiated and there were several poignant readings.  Afterwards, the guests headed upstairs to the breathtaking ballroom.  Each table was provided a board game.  As Alison explained, their friends are primarily introverts so they truly believed this would be the best way to keep everyone active and having a good time.  Games included Tsuro, Cargo Noir, Dominion, Scrabble and more.  The tables were all having a stellar time.  Seeing the different historical costumed guests surrounding the various tables in game play was fantastic. 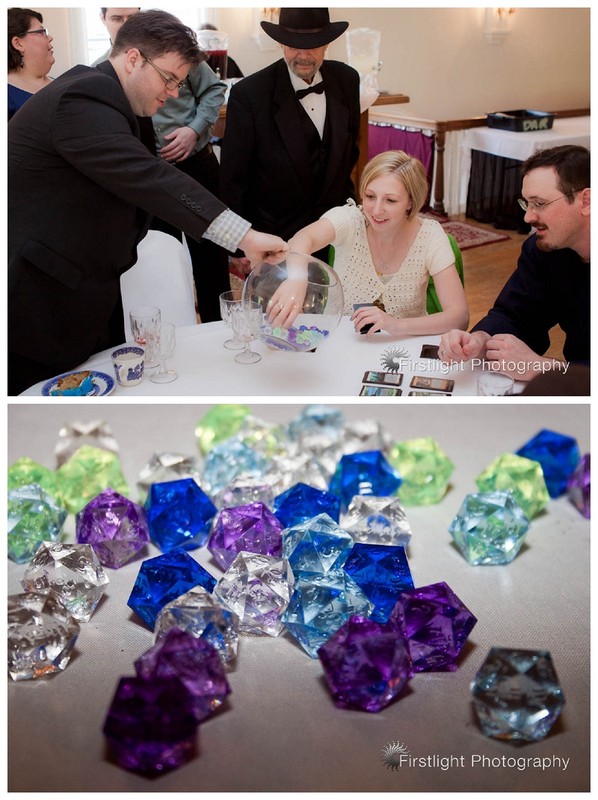 The vegetarian appetizers and dinner fare was prepared by the talented Seattle restaurant Madres Kitchen.  The cake was crafted by the Clever Cake Studio and Lori Evans, the owner, molded a perfect replica of the Epoch, the time machine from the classic video game Chrono Trigger. 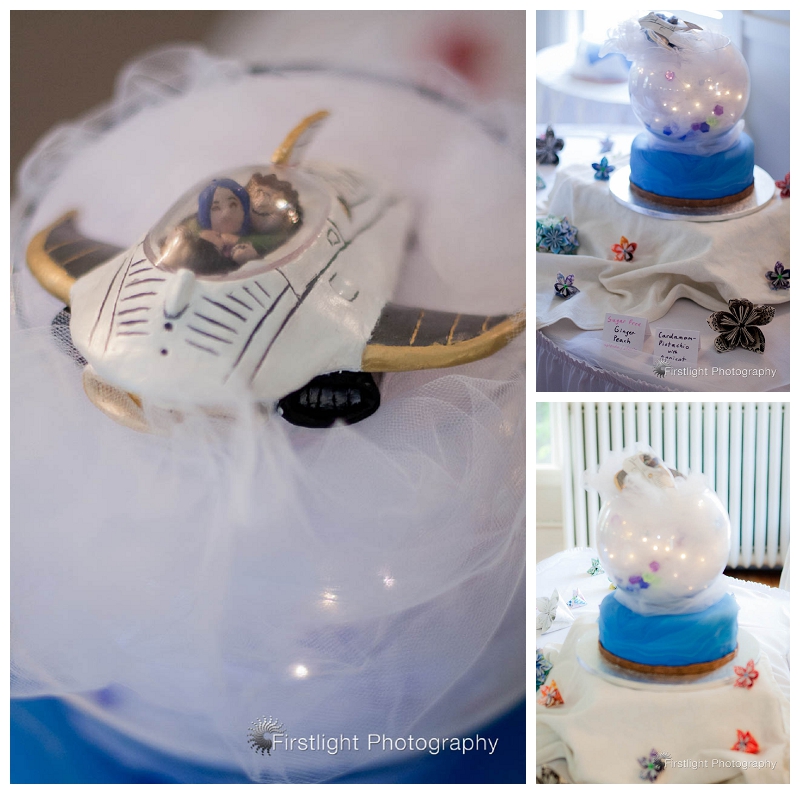 The groom was spotted passing out D-20’s, 20 sided die, acquired from Game Science.  These precision die come in a variety of amazing colors and offer a great twist on party favors.  When you are in the market for items that might not be considered a typical favor, call the vendor and explain your bulk purchase.  Alison and Mike did and got a killer discount.  This wedding photographer duo was able to take home this most useful favor too. 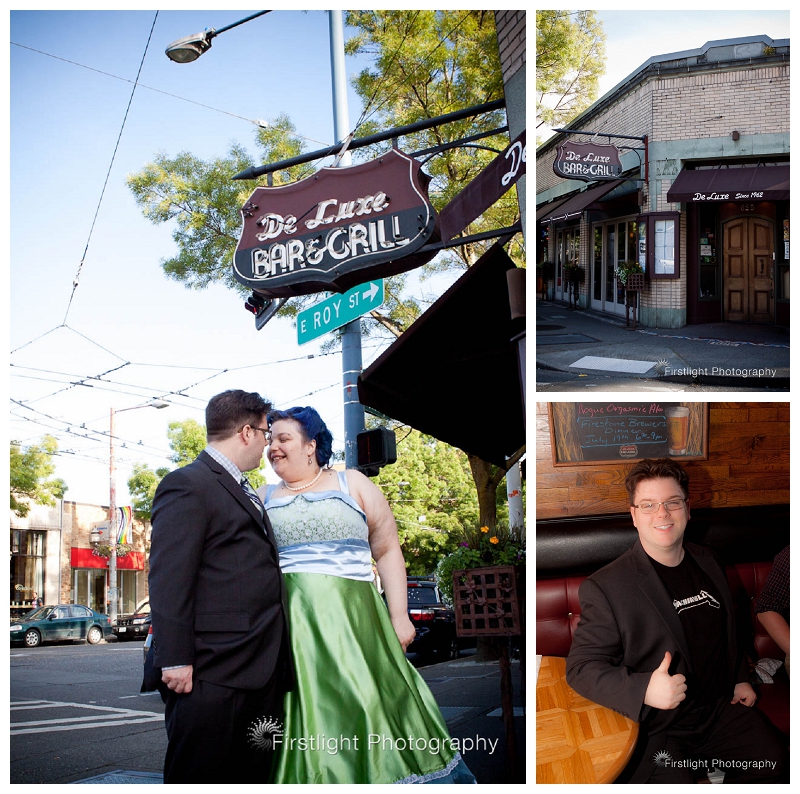 After the wedding the couple invited their friends and family to a pub crawl at one of their favorite haunts.  A short walk from the wedding venue lies the DeLuxe Bar and Grill which originally started as a tavern at the close of Prohibition.  The best part about being in Capitol Hill is that a large group of people dressed in historic garb descending upon a tavern just doesn’t freak anyone out.  There are no lookie lou’s in this situation.  It doesn’t hurt that it was also the same weekend as the Seattle Film Festival.